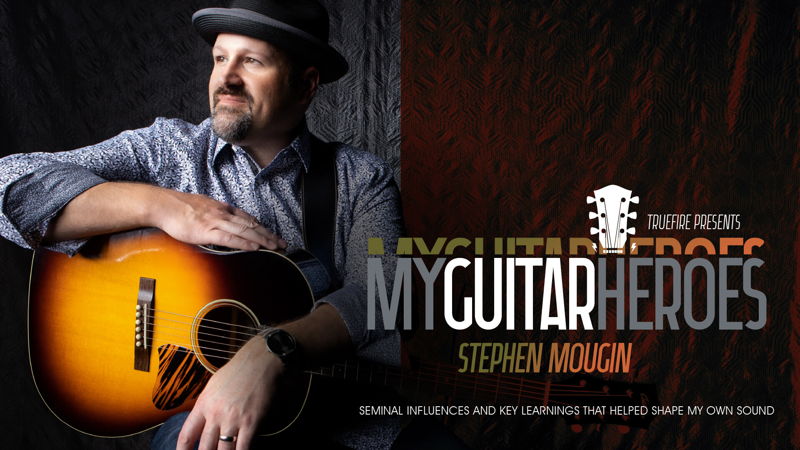 Learn Signature Techniques of Bluegrass Guitar Legends
Every musician has a long list of other musicians, past and present, that have inspired, influenced and helped shape their own sound and musicality. It’s the natural evolution of music. We asked Stephen Mougin to pass on to you some of the key learnings that his Guitar Heroes passed on to him.

”Maybelle Carter, George Shuffler, Doc Watson, Norman Blake, Clarence White and Tony Rice have all greatly influenced my own sound as I’m sure they’ve influenced many other players. In this course, I’ll show you a few of the techniques-and-approaches that I picked up from each one of them.

We’ll start out with Maybelle Carter. She was a pioneer who showed us how to play melody and rhythm at the same time. I’ll share what I learned from George Shuffler — a true innovator known for his cross picking style in the bluegrass genre. The clean picking, always tasty, Doc Watson is another major influence.

There’s Norman Blake who augmented his melody playing with an original open strum style, interspersed with blazing runs. Clarence White, who redefined the role of blues phrasing for bluegrass with a nod to other genres. And in the final study, we’ll look at Tony Rice who introduced his own fiery take on pentatonic licks and built a new standard in bluegrass guitar.”

In this course, Stephen will first introduce his heroes to you and describe why he found them so influential. After each discussion, Stephen will then present a performance study illustrating those influences in a musical context, over a backing track. A breakdown follows every performance and Stephen will explain and demonstrate all of the key concepts and approaches in play

”My best advice is to seek out these artists and do some serious, repeated, focused listening to their art. Getting “an ear” for their style will allow you to pick and choose your licks and melodic approach for each and every piece you choose to play. While I’m performing or in the studio, I analyze the band situation (how many players), the vibe of the song, and blend bits and pieces that might fit that particular setting. There is so much to be gained, both in repertoire and approach, by studying the masters.”

You’ll get standard notation and tabs for all of the performance studies. Plus, you’ll be able to use TrueFire’s learning tools to sync the tab and notation to the video lesson. You can also loop or slow down the videos so that you can work with the lessons at your own pace. All of the backing tracks are included to work with on your own as well.

Grab your guitar and let’s dig in with Stephen Mougin!