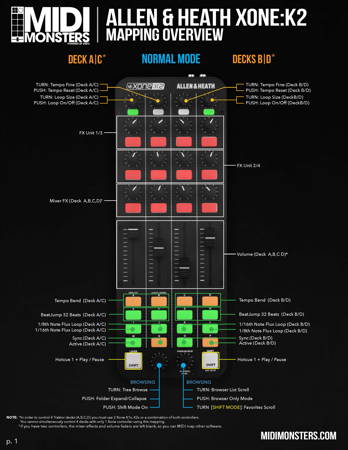 With our XONE:K2 Mapping, you can give your K2 even more live remixing power by adding tons of new workflow tweaks. We’ve added some secret weapons that A-List TRAKTOR Artists are using live in their sets. This mapping allows you to control up to four Decks, four FX Units, instant Looping, BeatJump, Tempo Bend, Hotcues, Sync, Browsing & Loading macros, Flux Mode Loop Rolls, powerful Effect Assignments, our Magic Hotcue button, Tempo control, Master Deck Selector, a built-in four-channel Mixer with Volume and Filter controls, Mixer FX, Reverse Button and more. On top of all of this, the mapping gives you awesome LED feedback that makes your buttons blink to the beat, allowing you to see even more of what’s going on in the TRAKTOR software directly on the controller, saving you time on stage, and it looks amazing in the club!

Note that this mapping also works with the XONE:K1. To use this mapping with the XONE:K1, all you need to do is assign the “In-Port” and “Out-Port” to “XONE:K1” in the Device Setup window in TRAKTOR’s Controller Manager. If you have two controllers, you can control all four decks and FX units. If you have one controller, you still have a built-in four-channel mixer, but you can only control Decks A & B and FX Units 1 & 2 from the controller.