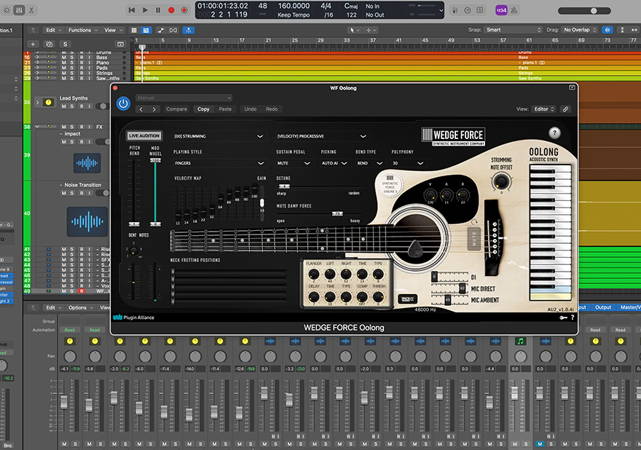 Multi-Signal Mixing Console
WEDGE FORCE Oolong outputs a clean acoustic guitar DI signal ready to be re-amped with effects. In addition, it outputs a Studio-MIC and an Ambient-MIC signals which were recorded in a professional studio using the Blumlein pair technique. You have full control over how to mix the three signals to achieve the right tone for your song.

Extra Expression
Because Oolong tone is synthesized (not sampled) it gives you control over where to pluck the strings. You can change your plucking position (in real-time) by moving the MOD wheel controller on your MIDI keyboard. Playing closer to the bridge will add an extra bright accent to your tone, like on a real guitar. Another way to differentiate your expression is by controlling the string damping force from fully open to heavily muted strings and everything in between. You can map the string-damping setting to a controller on your MIDI keyboard and change it while you play live.

Extra Range
Oolong is capable of synthesizing notes up to two octaves below the guitar neck all the way into the bass range. They all sound natural because they are synthesized from the same acoustic guitar timbre. This gives you an extra range to compose and play parts which are inaccessible on the guitar.

Better than sampled guitar
Ordinary sampled guitar synths have never quite sounded realistic because the harmonic resonances of the guitar strings are different for each quick combination of notes. This is why WEDGE FORCE built their proprietary “Synthetic Force Engine III”. It extracts the timbre from studio sampled waveforms and then synthesizes each note in real time, using algorithms which are carefully designed to preserve the original waveform timbre.

Studio Quality Effects
So many legendary guitar lines in history have been recorded at the studio with nothing but a mic and an acoustic guitar. Oolong gives impressively massive results right out of the box, with just a touch of an EQ. If you are after a more modern tone you can craft it using the onboard Delay and Flanger effects. Oolong also features a custom-built multi-band compressor which is designed to preserve it’s bright high-end frequencies.

Surround Sound
You can play Oolong on a stereo or mono track but you could also add an extra dimension (5.1, 7.1 up to 7.1.2 channels) to your movie or game soundtracks just by placing Oolong on a multi-channel track in your DAW. It will automatically output the surround channels and will optimize the Delay and Flanger effects to add a spatial atmosphere to your tone.

Fast enough for live performance, easy on the CPU
WEDGE FORCE Oolong’s sound engine has been optimized for performance up to the last CPU cycle to free up resources for the effects and other synths which may be running alongside it. Using 64bit double precision for the internal calculations, the latency of WEDGE FORCE software instruments is close to zero, less than 1 millisecond, so it feels and responds just like a real instrument should.