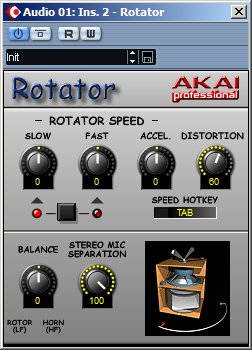 The ROTATOR is a VST plug-in that uses modelling technology to accurately
reproduce the sound of a rotating speaker.

Basically, speakers in the cabinet are spun around on motors and this has the
effect of (literally) throwing the sound around to create a rich stereo effect.
As the speakers move, not only does the sound move but, due to the Doppler
effect (the phenomena that causes ambulance sirens to change pitch as they
drive past) a subtle pitch shift is also achieved.

The result is a thick, stereo chorus sound that has been an integral component
in many prog-rock, gospel and other classic organ sounds. It cannot be
reproduced using simple chorus units and other attempts at recreating this
unique sound in musical history have been nothing more than simple autopan
effects.

Rotary speakers typically have two speeds – slow and fast – and these can be
selected using a switch. However, it’s not quite as simple as that.

Rotary cabinets usually have two rotating speakers known as the ROTOR and the
HORN. The ROTOR handles low to mid frequency components in the sound whilst the
HORN handles upper mid to high frequencies and these rotate at slightly
different speeds which subtly thickens the sound. Furthermore, when switching
between the cabinet’s two speeds, due to mechanical inertia, the speakers take
some time to speed up and slow down and, because of the different weights of
the speakers, the rotor and the horn speed up/slow down at different rates
(the heavier LF rotor taking longer, of course).

Add to this the distortion created by overloading the cabinet and a simple organ
sound can become thick and fierce. Of course, rotary speakers aren’t limited to
only being used with organs – they can be used on any sound and many distinctive
sounds have been created in the past by putting guitars, electric pianos – even
vocals – through them. The ROTATOR plug-in authentically emulates these
characteristics to create a very accurate simulation of the effect.

It is possible to set the slow and fast speeds of the effect and you can switch
between these speeds using either the panel switch or nominated ‘hotkeys’ on
your Mac/PC keyboard. The ACCEL (or ‘acceleration’) parameter allows you to set
the rate at which the effect speeds up/slows down. The DISTORTION parameter
allows you add some ‘edge’ to the sound to simulate the effect of the rotary
cabinet being overdriven.

The BALANCE control allows you to set the relative balance of levels between the
horn and rotor.

The final control – STEREO MIC SEPARATION – allows you to set the position of a
pair of virtual microphones. When recording real rotary speakers, the placement
of the microphones will yield different results. Placing them far apart will
give a wide stereo sound whilst placing them closer together will give a
narrower but more ‘direct’ sound. The STEREO MIC PLACEMENT control allows you to
set the position of the simulator’s ‘virtual’ mics. You can set the separation
from mono to wide stereo. As you adjust the control, you will see the position
of the virtual mics change in the graphic.

Whilst the primary application for the ROTATOR is to beef up organ sounds, it
can be applied to any audio source and there is nothing stopping you putting
guitar, synth, drum machine – whatever – through it to add a controllable, retro
edge to your music.