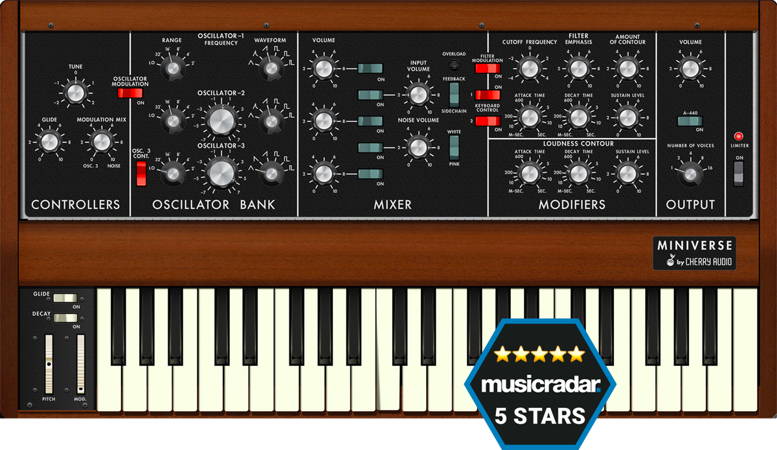 The Big Bang of Synths
Miniverse (formerly Minimode) is a painstaking virtual emulation of the granddaddy of all portable synthesizers. Introduced in 1971, no other instrument is more associated with the word “synthesizer” – it’s perhaps the best-known and loved analog synthesizer ever made. Though its innards weren’t identical to the massive modular synths, it shared the thick, juicy, “fat” analog sound that remains unchallenged 50 years later! It set the standard for future synthesizers, inspired whole new genres of music, and defined the sound of artists as diverse as Kraftwerk, Herbie Hancock, Rick Wakeman, Pink Floyd, Parliament, Gary Numan, and countless others.

And now, with Cherry Audio Miniverse, it’s your turn!

Miniverse was conceived as the ultimate tribute to the original instrument. We focused on a single principle: absolute authenticity. In association with DSP master and frequent collaborator Mark Barton (MRB), we studied and measured every nuance, every curve, and every response of the audio. Even the Miniverse interface is a meticulous recreation of the original, from the maple cabinet and textured surface to the unmistakable “Cosmo” knobs and switches. We avoided the temptation to add extra features, such as additional LFOs or effects, which might distract from the spirit and vibe of the classic model. Instead, Miniverse portrays the pure, raw, powerful sound and feel of the classic original.

Complete MIDI control and DAW automation for all controls, with easy-to-use MIDI learn