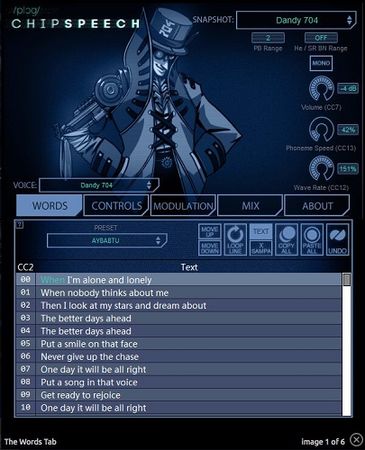 chipspeech is a vintage-style speech synthesizer which recreates the sound of famous 80′s voice synthesis chips. It features 11 different voices, each with its own characteristic timbre. It is specially tailored for musical needs – simply type in your lyrics, and then play on your MIDI keyboard. It’s a true synthesizer, the sound can be extensively modified for easy and expressive performances. chipspeech also features a circuit bending emulation, letting you not only recreate the insane and chaotic sound of a circuit bent TI speaking device, but also use it in a controlled, musical way.

Circuit Bending voices let you play vintage speech data through a bit accurate emulation, just as it would have been on the original hardware, while messing up the playback creatively by changing the pitch, data offsets and loop points.

These are NOT samples but original data files being played back by our emulator cores.